TDS on Interest other than “Interest on securities”- Section 194A of the Income Tax Act, 1961

TDS on Interest other than “Interest on securities”- Section 194A of the Income Tax Act, 1961 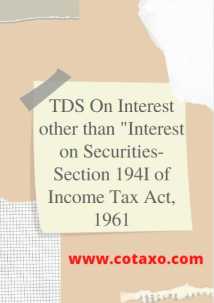 This section deals with the scheme of deduction of tax at source from interest other than interest on securities.

An individual or a HUF (Hindu undivided family) shall not be required to deduct TDS under this section.

However, an individual or HUF shall deduct TDS if his total sales, gross receipts, or turnover from the business or profession carried on by him exceed

The rate at which tax is to be deducted is 10% both in the case of resident non-corporate assessees and domestic companies.

The TDS shall be deducted at the earlier of the following

Note: Where any income by way of interest is credited to any account, whether called “Interest payable account” or “Suspense account” or by any other name, in the books of account of the person liable to pay such income, such crediting shall be deemed to be the credit of such income to the account of the payee and the provisions of this section shall apply accordingly.

Note: The aforesaid limit shall be computed with reference to the income credited or paid by a branch of the banking company or the co-operative society or the public company in case of-

(1.) To such income credited or paid to

* (National Skill Development Fund and Housing and Urban Development Corporation Ltd. (HUDCO), New Delhi have been notified by the Central Government for this purpose)

(2.) To such income credited or paid by a firm to a partner of the firm

(4.) Interest paid or credited in respect of deposits under any scheme framed by the Central Government and notified by it in this behalf

(6.) To such income credited or paid by the Central Government under any provision of this Act or the Indian Income-tax Act 1961

(7.) To such income credited by way of interest on the compensation amount awarded by the Motor Accidents Claims Tribunal

(10.) To income by way of interest paid by special purpose vehicle to business trust under section 10(23FC)

A co-operative society shall be liable to deduct income tax in accordance with the provisions of sub-section (1), if—

The TDS deducted shall be deposited into the government account within 7 days from the end of the month in which the TDS was deducted.

For TDS on Salary, Form 24Q is used and for TDS from all payments other than Salaries Form 26Q is used.

The deductor of TDS is also required to submit the TDS return on a quarterly basis. The due date of TDS return is as follows: –

STill have query Chat with us

Read Our Other Articles

About the Author: admin